In 1990-91 the School of Pharmacy adopted a new, semester-based, curriculum. Furthermore, in a 1992 meeting, the General Assembly of the School determined the Departments that are responsible for the teaching of those courses which belong to the scientific disciplines of other schools.
Starting from the academic year (2004-2005), the School introduced the concept of Academic Advising for undergraduate students. Every student entering the School of Pharmacy shall be assigned by the School to a faculty member who will serve as the student’s advisor for the duration of the student’s undergraduate studies in this school. The Academic Advisor will regularly be updated on the academic progress of the assigned students and will offer them guidance on academic matters. This initiative is realized through a wider Undergraduate Studies Reformation Program undertaken by the School of Pharmacy since April 2003, which is funded by a competitive grant (EPEAEK II) of the Ministry of Education. 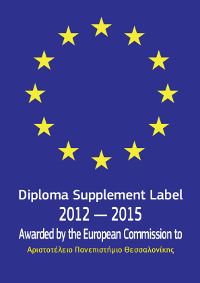